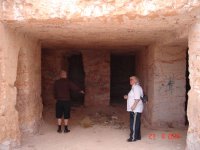 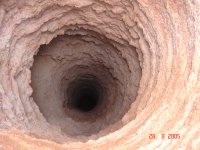 We headed off for the 10 hour trip to Cooper Peddy with Judy. The scenery was amazing changing dramatically. We left at 5 in the morning arriving at 3pm. We found a gorgeous B&B for the two days we were there.

Check out the photos, unfortunately we did not find my special opal, oh well.

On the return journey we looked at Woomera, the museum is worth checking out. Moving on to Roxy Downs. Olympic Dam is huge and is a very productive mine. The town is new and has everything one could wish for.

We enjoyed the trip and thought it was well worth doing taking us inland and reminding us that Australia is a very diverse land.

Back to work for a couple more weeks.

We have been virtually land based since our last update based at the CYCSA. The Adelaide weather has turned decisively cold, raining for a few days off and on, even so the weather has beautiful sunny days in between. All four WA boats are here at the CYCSA (Cruising Yacht Club of South Australia) and all doing their own things.

Paul and I have been lucky to get jobs- Paul is working for "The Support House" in support and sales where he gets the use of a car, Tracy did some temp work at Transport SA and is currently working full time in libraries, two days at Port Adelaide Library and three days at Salisbury Library (where Bernie McSwain is Manager) catching two trains. Life is hectic working and living on the boat, we get changed twice each morning one going to the shower with lots of jumpers, scarves, and our ugg boats and then changing into our work gear. A couple of days have seen ice on the dock making it slippery. The people here are very friendly and we have struck up a lot of contacts during our time here.

Tuesdays (it used to be Saturday, but the West Australian's changed that) is the "in transit" BBQ (what we called at FSC "live aboards"- but they do not have live aboards here officially at CYCSA). Quite a few cruisers turn up for the BBQ and the company is as lively as Freo.

Tracy's mum and Dad, Ann and Arch Fraser, rang us to say they were in town, it was good to catch up with them as they have been travelling the east coast in their caravan. Their trip has been great and they are planning to head to Tasmania next year (all going well when we are there so we may catch up with them again soon). Mum and Dad stayed with us on the boat for a week and enjoyed the friendly cruising hospitality here. Although I was working the time I had with them was great it was a shame it was not longer. Mum, Dad and we all headed off to Hahndorf for the day and enjoyed walking around taking in the sights.The couple from Anki II, Anki and Dieter were heading home (via land to QLD) for a couple of months and had a great party on their boat- I think over 30 were present-prior to them heading off. We get updates from them titled "Land cruising" which is fantastic to read about.

Our trip to Perth for our daughter Danielle's 21st went well, thanks to all the family especially Paul's dad Ian and his brother David and his wife Christine and it was great to catch up with the kids and all the family and friends in WA. They are all fine, doing well not missing us at all. Tamara was doing her second stage driving and we were privileged to have her drive us around so she could accumulate her hours. She is now qualified and has her licence- well done darling. Samantha now has her Learner's permit and it won't be too soon before she has her licence as well, she has had her Moped licence for quite a few years now so it should be not too long before she gets her car drivers licence. We just received information about their reports Samantha has received credits and passed all her units and Tamara has got an excellent report for her Year 12. We are so proud of our girls. Danielle is enjoying her new job at Estuary Marine in Mandurah and has now got a traineeship, well done. Our time in WA was so very busy and flat out, we were due to attend Hannah's 2nd birthday, an important event but it was the only day I could get all the girls together and spend time with time and see the block of land Danielle and Chris had purchased before heading back to SA.

It was interesting flying back, as we felt that we were coming home to our home (Cockatoo II) and that we no longer had a base in WA- so officially we are now cruisers. (or more officially itinerants with no fixed address).

Judy Leefson took us to McLarenvale. We stayed in her holiday house and slept in a real bed (bliss). She also took us way down the coast as far as Victor Harbour giving us a grand tour of tourist bits and also marinas and places to moor. Very interesting and marvellous company.

Then Michelle and Phil took us to the Barossa Valley where we stayed in a motel and toured the wineries. The highlight was a tour where we tasted a 100 year old port-it only cost $1000 per bottle. A taste was all we could afford and justify.

A beautiful weekend saw Azure and Cockatoo take a trip up to Port Adelaide overnight. It felt good to take the boat out again and remember what it was like to go sailing.

Azure and us investigated buying another boat and doing it up for resale as there was an repossession auction down the road of a 60' boat. We were keen but our top final price was the starting bid. Oh well. It was an interesting exercise anyway.

Another beautiful day and Mendana, Cartref and we took the car for a drive down to Victor Harbour were we spent the day checking it out. The wind was cold but we had a great time.

This weekend we went to the Adelaide Boat Show at the Adelaide Convention Centre and discovered that we were required to have a Boat Operators Licence, because there is no licence in WA this means that as soon as we entered SA we were deemed to be illegal. We presumed that we had three months grace but this is not the case. Tracy sat hers at the show and passed first time (an improvement if one thinks of how many times she had to sit the Radio Operators licence). It is interesting to note that the licence is for life and does not need to be renewed. It does carry across to the other states ie Victoria and NSW, for the period of three months when we then have to get a state licence. Tracy sat in on a presentation by Annie Rogers title "women and boating". It was a good talk as she is a very interesting woman. Annie is actually the first woman Vice Commodore of the South Australian Royal Yacht Squadron and is about my age. I was invited to go sailing with the women early August, and asked if I could extend the invite to the other WA women. So Lorraine from Mendana, Lilly from Azure and Tracy are out sailing with the South Australian Royal Yacht Squadron Sunday 7th August. Annie just emailed back saying that we will be the most experienced sailors, well they will get a shock at my skills I can tell you. Chris and Lilly from Azure took us out on Sunday to help teach me a few things. (I found out what a vang was). I was also lucky enough to hear Diane Halden, Managing Director of the "Womenonboats" website talk, check out her website www.womenonboats.com.au.

We cannot believe we have about another 6-8 weeks to go before we head off to Kangaroo Island and beyond and really we are ready to head on. Plans in the meantime- Copper Peddy and the Murray River to complete our time here.

Working has meant that we have topped up our cruising kitty as well as splurge out on a couple of luxuries. There is a movie theatre down the road at Semaphore which charges $6.00 to see a feature movie and dinner at the pub costs $10.00. Things we have bought and installed on the boat during our time here- a large flat screen TV/computer screen, a new inner sprung mattress for the boat and a washing machine-front loader. Yes I have succumbed to the traps of modernity-washing by hand and spending hours at a Laundromat are just not on. The washing machine is a little Samsung front loader, very quiet. It will run off our invertor and the water maker will supply the water out sailing and when in Port we will use scheme water.

So all in all we are working hard ready to get sailing by mid-September I hope.

Hi Guys
It was a pleasure making your friendship here in Adelaide. We won't forget the good times we had. Hopefully our change to sail will come to fruition in the near future and maybe catch up further around the coast one of these days.We wish you well and safe sailing and good luck. Keep in touch.

Great to hear that all is well.
You are not missing anything by not being here.
I look forward to following your adventures.

Love the sound of Kangaroo Island. I understand that the fishing is great. Suggest that you buy a little soft french bule cheese before you leave Adelaide and savor it with some Ligurian Honey and a nice botrytis sticky, maybe a DeBortolis

Seems like all is well. Its great that you could both get jobs so easily.

Do you have any contacts in Perth who I could contact about setting up Davids computer network from Shark Bay, Kalbarri, Geraldton and Perth. It would have to be supported as well? We will have get the software and the hardware.

Would Sybiz or Andrew Quinn be good starters?