We planned to leave at lunch time with the winds in our favor (Easterlies-no Easterlies cross fingers). Leaving at 1.30pm we had favorable winds of 15-20 knots gusting to 23 knots. Swell and Sea 3 meters from the SW quite rolly but still it was good to be actually sailing (pleasant to the ears) and not motor sailing. The water maker was put on to fill the tanks on the way.

Just half way we experienced strong rain squalls of 30 + knots forcing us to reef the headsail right in until they passed, quite scary as the boat rounded up but they were short in duration. We could see them coming and were worried about traveling through the night and hitting one. Lucky that did not occur but it kept us on our toes. The temperature dropped during the night making us rug up, but we felt quite well protected from the elements in our cocky's cage.

The cliffs where the 12 Apostles are were very impressive but we were too far out to see them. We saw lots of large ships some coming very close again keeping us on the constant lookout. Approaching Apollo Bay the wind dropped, our speed dropping to 2 knots, I passed Apollo Bay 3 times as the tide pushed us back again. Dolphins came close and were leaping and twirling in the air near the boat, in the early mooring light it was fascinating to watch and really enjoy (amazing that this action is natural and not just for the show circuit).

The entry into the fisherman’s harbor is quite tricky. The swell is across the entrance, which is quite narrow. If one does not time it well I can see that there would be problems. It is documented that several boats have come to grief here and there has also been loss of life as a result.

All three yachts are tied up on the itinerant wharf. Very clean and the surroundings are impressive with huge green rolling mountains as a backdrop and a very lovely beach (kid safe) with town in the middle. It is quite touristy but a lovely place to investigate.

This is our last stop on mainland Australia as we now head for Tasmania via King Island.

We waitied again for the right weather window, and during this time the yacht "40 something" rafted upto us (we had met them during the blow in Robe) on thier way back to Melbourne.

Tracy celebrated her 44th birthday with a champagne breakfast, Paul cooking the pancakes and Lilly making a scrumptious birthday cake. 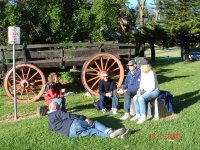 Hurrah the weather is on the improve and we had a pleasant motor sail from Portland to Port Fairy. The winds were 10 kts from the WNW and we ran the Asymetric most of the way. We had hoped to stop off at Lady Percy Island for lunch but there was too much swell so continued on, there were lots of seals swimming near the coast and apparently it is the home of some rather large white pointers as well. Maybe it was a good thing we did not stop.

The sun came out about lunch time making it a rather pleasant day showing up the beatuy of Port Fairy, greens, blues, etc on our approach. Port Fairy entrance is a canal leading upto the wharf area and main township. We have tied up alongside the wharf and Azure has rafted up to us.

Port Fairy is beautiful, clean, serene (rather like a movie set), lots of tourists and we, being on the wharf, are on constant survelliance and comments by passerbys. A good friend gave some excellent advice- Just do not look up, do not look up at all-otherwise you get caught and are obliged to enter into a conversation.

We are looking forward to exploring this delightful town and enjoying what is has to offer us.

Portland is a large country city, we anchored off the city centre with the huge port for larger ships at the back of us and the beautiful city in front of us. The weather has been very overcast and cold but we have been relaxing and exploring the city centre.

We have reprovisioned, an interesting exercise considering we have to carry it from the shop, down to the jetty, fill the dingy, take the dingy out to the boat, unload the dingy and pack it away. Who says we do not get enough exercise.

We have refueled here, the insurance assessors were on the boat viewing the damage (or loss of) the wind generators and they and the boat were acidently sprayed with fuel-really it was an accident. Count on the Bushells to make an impression.

There is a seal in the harbour which is a delight to watch and very avid fishermen catching fish not far from us. Apparently there are also penguins but we have not seen one here in the harbour.

Looking forward to a break in the weather so we can head off to Port Fairy soon.

We arrived in Robe on Sunday 30th of October afternoon at 6pm after approx. 12 hours of SE winds at 30 plus Kts on the nose a bit more than was forecast so the last part of the trip was not so nice. There were whitecaps on them thar waves, it was a very uncomfortable trip and we got very wet. We lost both Wind generators overboard when a large wave went over the boat and hit both of them snapping them off at the mounts, O Well isurance claim coming.

Tracy is fine and doing well and is quite happy on the wheel while Paul does the hard yakka (took her a long time to work that one out).

We had to anchor outside the Robe fishing harbor as the main entrance was only 2 mtrs deep due to it being low tide, also the harbor is full of fishing boats and there was really no room for the three boats to fit.

We all had to move into the main harbor on Friday as there was a storm warning coming and it would have been very rough out in the anchorage. A local lobster fisherman said- I'd reckon you'd be better off in here as it is not safe out there and make it snappy, so the three boats Azure Retour and Cockatoo squeezed in. Gale force winds of 30+knots were experienced for two days, even the fishermen did not venture out. We tied up at the jetty and felt very happy not be out there, another two yachts came in during the night to escape the winds as well - making in total five Extra yachts in a very small harbour.

We spent a few days exploring the township and resting. Robe is a lovely town and has done a great job of renovating most of the old buildings. The towns people are friendly and helpful. We would recommend putting this town on your to visit list.

Once the weather improved (we could tell as the fishermen pulled up and loaded thier boats at four in the morning next to us) we moved back out into the bay in perfect summer weather.

More bad weather on the way so are planning to head off to Portland on Saturday
afternoon.
Assorted Photos of Robe

on Tuesday, November 8th, Peter Whalley said
Hey Team Paul and Tracy!Great to see where you are at. Enjoy, and keep us silly buggers, at work, informed!Regards, The Whalley's of Lane Cove