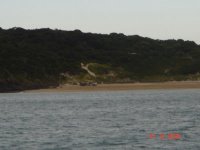 Stopping overnight at Georgetown moored at a pontoon, Azure rafted up to us, we provisioned for our next leg. Gorgetown is the oldest town in Australia and very pretty. There is a reasonable shopping available. We also had a drink at the Pier Hotel. Lilly, Samantha and Tamara and Tracy met the voice of Tamar Sea Rescue-Bryn and his son Kevin. Tracy introduced him to Tamara by saying " this is Bryn, he is the one who wakes you up on the radio each morning". Tamara blushed.

We left George Town on the Tamar river at 9am and headed off to Waterhouse island, the trip started well with nice winds but they started to get stronger than forcast and as usual not in the direction forcast. This caused us to have 1 hr of uncomfortable seas we had to pound into them as there was no protection (bolt hole) until we rounded a point.

We spent New years eve at South Croppies Point just near Waterhouse Island with Chris and Lilly from Azure, sharing champagne, red wine and dinner whilst at anchour. We could not hold out until midnight so had an early night. There was also a big bonfire on the beach, so we were not alone. Happy New Year everyone. 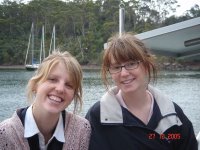 Christmas Day was spent opening presents and a get together with Azure, Retour and Dolphin III. We took our eats into the Tamar Yacht Club Boat shed and had a fantastic afternoon, eating, drinking, talking eventually sneaking away to have the obligitory siesta in the late afternoon. We talked to the family and Danielle and Chris via mobile phone-miss them all-Christmas brings the family to the fore.

Boxing Day saw Cockatoo II leave Launceston and head up the Tamar River on high tide, anchoring before the Batman Bridge in Spring Bay (opposite side of river to Deviot). A night spent in this ideallic spot before heading back to West Arm just off Beauty Point. The winds picking up, we are tucked away as there are strong winds expected for the next few days.

Tamara cooked a sticky toffee pudding (yum), Samantha had cooked some scones a couple of days before. They are fully rested and looking for things to do. Tamara has checked her TEE Year 12 scores and has achieved a score of 73.5-well done Tamara-she can get into Curtin University with this score. Samantha has also passed all her university units. Congratulations.

Arriving in West Arm, we no longer had this lovely bay to ourselves-with the Christmas period there were about five other boats sharing it with us. Listening to the VHF we hear that Degrees of Freedom (Mike and Nicky Reynolds) were at the mouth of the river. They expect to catch up with us this evening at West Arm. It will be good to see them, they left Perth just before us one year ago-they have sailed from Melbourne over to Tasmania for their break. 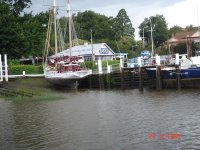 Traveled from Deviot to Rosevears where we had lunch at an old pub, very up market. We also took the tender over the other side to Windemeare to see a beautiful old church (est. 1831). Leaving at 1pm we deaprted for Launceston, to ensure that we would arrive on a high tide at 3pm. The Tamar river is very pretty and gets very narrow the closer one gets to Launceston. Launcseton is nestled into the surrounding hills and is very beautiful.

There is a suspension bridge further adding to the beauty of our surroundings. The Tamar Yacht Club is small and we have tied up to a floating pontoon and have access to toilets, showers and there is also a washing machine if required. Azure had rafted up along side us and will move alongside the pontoon later today. There is a substantial tidal movement in the river, and is very obvious here with boats standing out of the water when it is low tide. We are actually on the bottom in mud at low tide.

It is a short walk into the CBD and there are several walks to do whilst we are here.

A short 3 mile trip from Devil's Elbow to Deviot Point.
We traveled on a rising tide with lots of little whirl pools everywhere, It looks like a day of rain so we will stay on the boat until it clears up then go and have a look around.

We moved to Devil's Elbow this morning nice well protected Bay from all winds except South East. We anchored and have the Batman Bridge as our scenery backdrop. 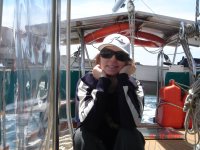 Well we left Devonport at 8.45am and motored to the Tamar as the winds where forcast to be variable and the seas where calm, Thought this would be nice to the Sam and Tam.
We arrived at West Arm to a lovely bay with heaps of Oysters on the shores. Tamar West Arm Photos 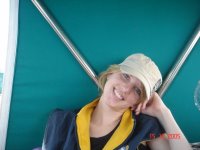 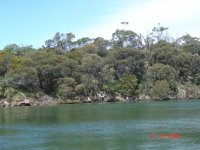 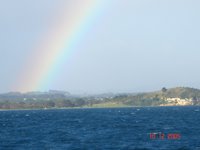 Left Stanley 9th Dec and Stayed overnight at Table cape and then onto Devonport and arrived at 12.30 on the 10th with a nice 30 mile sail with the wind behind us. We only had the Genona out and were moving along at 8.5 kts at times, the wind was mostly around 25 kts with a max gust to 44kts but as this was all behind us it was not posing any issues. The sea was even quite flat as the wind was from the SW and coming off the land.

The entry can be challenging with breakwater at the enterance so it is recommended that one enters on a slack tide. We have picked up a mooring off Mersey Yacht Club as anchoring is not recommended. The strong wind/tide is similar to American River at Kangaroo Island. There are also large logs floating down the river. The yacht club is at the top of the river and we passsed some gigantic liners and containerships on the way. We stay here until Wednesday. On Tuesday we drive to Hobart to pick Tamara and Samantha up from the Airport, Tracy is chafing at the bit to see them.
Devonport Tasmania Photos 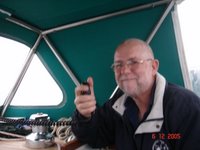 We are in Tasmania! Wow!

Leaving Grassy at 5.30am with good 20knt winds started heading off towards Stanley. Just out of Grassy we lost our steering, due to a hydraulic coupling coming away, with no steering we found ourselves drifting into a reef and set the anchor, thank goodness it caught and held us until Paul fixed it. Good fun but it could have been worse. We started off again at 7.30am still with good winds and swells of about 1 metre, about halfway the winds died down to about 10 -15 knots and we went between the islands with the Three Hummocks on our port side. Arriving at Stanley at 7pm - 77.5nm taking us 13.5 hours in total.

Stanley is beautiful and historic town, with a huge granite outcrops called The Nut towering over the town. We have moored at the fishing harbor, a five minute walk to the town. The jetties are solid jetties (reminding us of Fremantle), tidal range of over 3 metres making us use very long dock lines. We feel very miniscule, the wharf and The Nut dwarfing our presence here.

Fancy that we are in Tasmania-just in time to greet the girls when they arrive.
Stanley Tasmania Photos 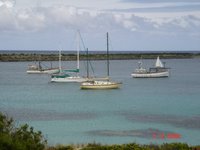 Leaving Apollo Bay was interesting, the swell across the entrance had built up and made it quite difficult to exit. Putting the main up was made harder because the wind had wrapped the main halyard around the maststeps, so Tracy had to go out in the swell (hanging on) to untangle it so the main sail could eventually go up.

We left Apollo Bay at 2pm on Tracy's 44 Birthday the 30th of November and had a great trip to King Island on Sail power alone arriving at 8am the 1st December. It took a total time of 18hrs to travel the 86 Mile trip, as a lot was at night time we reefed in the heady so that it was more comfortable and less prone to possible wind gusts. The only problem was that you loose a little speed. Anyway the swell and the wind was in our favour for once. There was a lot of water over the deck.

King Island is huge (64kms long and 27kms wide). Grassy is quite secluded (the township is 5 kms away from the port) but there are beautiful beaches and huge green hills. We have taken a mooring which has the most gigantic chain attached, Paul had to use the anchor winch to pull it up so we could attach ourselves to it. We won't blow away for certain. The harbour is well protected by a huge rock wall built out to a small island which is a Fairy penguin colony

There is another low coming through tonight or tomorrow so we are holding out here until it passes and then on our way to Tasmania. The girls fly in to Hobart on the 12th December, we won't be in Hobart but will do our darnest to be on the mainland at least for them. How time flies by when one is cruising, almost one year ago we headed off and look where we are now.

We walked up the hill to the Grassytownsite and halfway accepted a lift the rest of the way. Grassy townsite has a coffee shop, laundromat, small supermarket and a gift shop (the owner is originally from Busselton, WA) selling handmade artifacts made from Bull Kelp. Just down from the town is the remains of a tungsten - Shellite mine which was closed in 1990 but may reopen in the near future.

Bev and Jan got friendly with Jackie and Malcolm owners of the supermarket and had the loan of their car to see the rest of the island. Jan was not well (tooth abscess) so five of us went to check the island out going to the main town of Currie, south of the island Surprise Bay, Naracoopa and of course the King Island Cheese factory (yumm). The island is beautiful, rugged and very isolated. Something we learned was that there was a King Island Kelp Industry. Harvesters collect the bull kelp off the beach after storms and cart it back to a plant in Currie where the kelp is dried, milled into granules and shipped to Scotland where over 380 types of alginate are extracted. The gelling and stabilising properties of alginates are used in the manufacture of over a thousand products such as cosmetics, sauces, fabric dyes, toothpaste, shampoo, icecream, beer and medicines. We where told that the Bull Kelp only comes ashore in two places around the world one being King Island

Jackie and Malcom came for dinner on Cockatoo so we could say thanks for the use of their car, unfortunately we were leaving at 5am the next day so it was a very short night but very enjoyable.
Assorted Photos of King Island