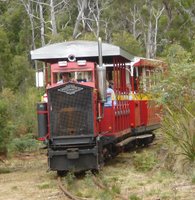 Southport - 24 Feb
Voahangy had to return to Hobart as they were flying back to NZ and had to secure their boat so left after a morning coffee on board. We headed off to Southport to reprovision.

Southport is a lovely town but as the beach area seemed too exposed we decided to anchor behind Penguin Island and take the tender ashore. Motoring over we hit a submerged rockstopping us completely, it was not indicated on any of our pilot guides or charts. Anchoring finally in Deep Hole Paul dove to check out the damage, reporting that there was nothing to worry about but it shook me up. Dolphin III is here as well and it is good to catch up with Ken and Di again.

It is a beautiful anchorage with white beaches and very protected. Walking into the townsite (north) the only shop is the caravan park and tavern. It is a town of 75 growing to 400 in the holiday season. The shop had meat and a few tins but no fresh fruit or vegs. The owner took Paul to get the petrol tank of the dingy and took us back to the dingy which was lovely of him.

Ken and Di came for dinner and cards on board, fish, abalone and chops were on the menu. It was a lovely night.

Paul and I will go and check the train out and have a walk along the beach before heading to Recherche Bay this afternoon.

Mickeys Bay - 22 - 23 Feb
Arriving there were four other boats in this beautiful bay. Anchored with 30 mtrs of chain out. Having dinner and drinks aboard Voahangy late into the night.

The next day we all had a walk along the beach(very muddy) and collected oysters and mussels for dinner. Another night of drink, food and cards on Cockatoo was enjoyed before hitting the pillow.

Chilli Tomato mussels were nice but having to pick the crabs out of most mussels shells was a challenge-still they tasted nice.

After having a sleep in we pulled anchor and motor sailed across (again) as the wind dropped out half way across the 6.9nm channel to beautiful Partridge Island. We anchored just off the shore in deep water and put out the net and lobster pot. Taking the tender to the jetty we went ashore to find four men camping their catch, mussels, oysters and abalone. We took a walk to the other side of the island and we back and had a chat to these guys before heading back to the boat. Keith and Rosemary from Voahangy radioed in, they had passed us and were turning back to see us. We met this lovely couple in Hobart, and they were on their way around the West Coast and have actually circumnavigated Tasmania back to here. We hope to be able to spend a couple more days with them before they head back to Hobart to leave the boat as they are heading home to New Zealand. Next year they are heading to Europe on the boat to see the Rugby World Cup. We had dinner on board Cockatoo and went to bed a bout 1pm.

Waking up late, very late on an overcast, cold morning, the wind is still blowing and we are considering moving further down the bay where hopefully there will be more fish. There is no internet here.

Dover - 20 Feb
We arose early and motored from Franklin down the river sliding through the mud a couple of times, travelling the full 19.7 nm in 3 and half hours. We anchored off the main townsite in deep water with Cartref and Mendana coming in behind from Southport. Having a tea on board Mendana catching up with all their news of the West Coast and reuniting with Cartref last seen in Hobart.

Taking the tender ashore we explored the town which is quite large and very beautiful with the water outlook and hills in the background. There is a reasonable sized supermarket and local deli, the most exciting part was the mall and the post office had a café. This town is a fishing port with large vessels tied up to the wharf and lots of fish farms on the shore.

With expected strong winds we all moved across the bay and anchored behind Rabbit Island where a sundowner was enjoyed on board Cockatoo.

Franklin - 19 Feb
Going further up the Huon River was interesting as it was a very narrow channel sticking close to the shore, we had to consult the map as to best way to go as we hit the bottom, thankfully mud. Arriving at Franklin a delighful town with the famous wood building school. We tied up at the wharf and went exploring. There were no shops only tourist facilities and shops such as cafes, etc.

Port Huon - 18 Feb
We have just arrived at Port Huon and been welcomed by a local in a dingy Brian Kilby, who kindly rowed out and gave us the use of his mooring, Its amazing how generous people are, we have invited him on board for a coffee this afternoon.

The sail up the Huon River was great (although we had the sail up for about 5 minutes as the wind was 15 knots but as always on the nose-we had to reef in quickly as the wind chenged quickly and a wire appeared-it took us a while to figure out what it was and console ourselves that we had not broken anything important.) The journey was pleasant with a cold wind but beautiful sunny weather highlighting the stunning scenery passing by, also passing a number of racing boats with full spinnakers up.

As it is Saturday will check the town out this afternoon and then have a beer in the local pub and check the menu out.

Cygnet - 17 Feb
Anchoring off Cygnet sailing club and the multitude of moorings we walked the two kms into town. It is a small country town with library, pub and two small independent supermarkets, two butchers. Very pleasant town and quite beautiful with a bird sancturary in the marshlands surrounding the township.

Garden Island - 16 Feb
Leaving Isthmus Bay late due to northerlies coming in the next day we headed towards the Huon River anchoring off Garden Island just before sunset. This is a well protected area and obviously a holiday area with lots of holiday shacks and dingys near the shore. The island is privately owned. Paul put the net in but nothing caught, the line was not very successful either.

Exploring early in the morning we met the crew of Quintal whom had met Mendana at Recherche. They were heading back to hobart after a week on the water. We left Garden Island prior to lunch heading to anchor off the township of Cygnet.

Isthmus Bay - Simpsons Bay - 15 Feb
Passing a tug boat towing a fish farm ring down the channel we anchored in Isthmus Bay, at Simpsons Bay where it is quite shallow right into the shore. We took the tender in at 8.30pm, having to walk the tender in as far as we could. The tide was on the rise so knew we would have to wade back out to it later. We came ashore to see the Fairy penguins arriving on the other side of the island Adventure Bay, sitting behind a shelter near the beach with all the other tourists. We hid behind a shelter and could only use red lit torches. The penguins are gorgeous and one never tires of this sight. The babies were quite large emerging from their burrows quite unafraid of us waiting for their parents to come home. I was so cold I had five layers of clothing, the water though was warm wading out to the tender. We had a warm milo on our return and hit the sack.

Next morning, was very overcast and cold, the travel has got to us, we slept in and after breakfast spent the morning back in bed asleep. The fishing lines are in but the fish are not bitting-stir fried vegs tonight. We will be well rested for our next adventure the Huon River.

Kettering - 15 Feb
Motored over-it is such a crowded bay with marinas and moorings. The ferry to Bruny Island leaves from here (cost $25 per vehicle return). We anchored a fair way out and took the tender in. All boating facilities are here-fuel, slipway, chandellers. Had a coffee at the marina and walked to the post office, wich is a little room of the Caltex garage.

Met Allan who does a sched with the abolone fishermen in Port Davey 4260 at 10.20 am each day. Said we may log onto him.

Headed off from Kettering as was too crowded for our liking and the swell was picking up back across the Channel to Isthmus Bay, anchoring off Simpsons Bay. During the trip we rang the girls to tell them that we would be out of phone and internet range for about 4-6 , so if there were any issues that they ring Pa or Gran and Pop until we come back into range. It was lovely to hear from them they are all doing so well. We are so proud of them and miss them dreadfully.

The Duckpond-Barnes Bay - 12 - 13 - 14 Feb
Paul put the anchor winch together and it is now working beautifully and the anchor is up and we are heading across the channel to Barnes Bay right up the end to a place called the duckpond. The duckpond is a small bay protected from all sides, with glae force winds expected it is the ideal spot to anchor until all calms down. When we arrived there were only three other boats, this afternoon there is about seven. There are also a group of kyakers camped on the shore for the night. We met the boat next door when he anchored too close and nearly swiped us as we swung around. Chris and Lilly arrived later in the afternoon. We had breakfast on board Azure this morning-they are heading to Dover today and then Recherche Bay to wait for a weather window (possibly Wednesday) to head to Port Davey. We waved them goodbye and felt so sad to see them go and not go with them. We want to explore the Channel as much as we can before heading off. We are having a quiet day resting waiting out these winds.

Later that morning Cartref and Tinacria anchor in the Bay, mre comfortable in here than out sailing. AThey are off to Recherche Bay to meet Mendana. They left early the next morning-we stayed another day and tested out the net-not catching anything of significance. Paul, my hunter and gatherer, collected a great feast of oysters which he cooked to perfection.

Paul caught two cod on the line-not very nice eating, will put these ones back next time.

We are planning to head across the bay and check Kettering out tomorrow-will see what tomorrow brings.

Snug Cove - 11 Feb
Left today 11 Feb at 10am, with little wind and it steadily increased to 25 knots coming in gusts. We only had the genoa up but pulled it down as we turned the corner -the wind was on the nose. We saw Retour pass by and called them up to say hi, they should be safely tied up in Constitution dock by now.

Motored and are now anchored in Snug cove just around the corner (14.7nm in fact)-the anchor winch was running roughly and we have pulled it out and it is in peices on our deck ready to be put back in tomorrow am. All fun and games at the moment. Missing Hobart but glad to be back on the water.