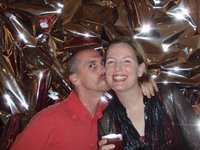 Tracy headed for New York last Friday to spend some extra time with her sister and help her in the business as Tom (her husband's) father had died and he returned to Autralia of the funeral. I stayed in Washington with Graham as I wanted to go and see the Annapolis Sailing boat show and the Power boat show, these were very large shows (suppose to be the largest in the world) and I must say that there were plenty and plenty of boats but I was expecting a lot more stands for the extras that go with the boats and was disappointed in that area, but they where defiantly worth going to. During the week I traveled into Washington and went to the museums, did the Postal museum and went back to the Air and space museum 3 times just to see all the exhibits, I returned the rental car on Monday, Graham took me out to another large airo flight museum as well on Sunday 7th Oct and this was great as it showed a lot of the orginal old aircraft and a history of all the motors up to the jet age.
Am now at the Washington Union station waiting for the 11.25 train to New York and expect to arrive there about 2.45 this being a 3.25 hr trip, when Tracy did it last week here train brock down and she had a extra 2 hr wait b 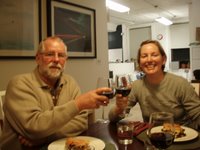 ut got there in the end.
We then spent one week exploring New York City, did the double decked bus tour to New York, Brooklyn and Downtown. We had great weather.
Hired a car and drove to Boston. Along the way we stopped at Rocky Hill, and various other towns along the way. Loved the autumn colors (fall) and the country this way. We then headed back to NY and hired a limo to take us the the airport and home. I loved catching up and spending time with my sister, getting to know her again and see her new life and how busy she is. She is really a very talented person and I am so proud of her. By the way we saw the launch of Aunty Wendy's new project with time Warner.
# posted by Paul Bushell @ 11:10 AM

Day 31
Had breakfast near the water, cereal and drove into town. We stopped off for a cappuccino in a cafe in main street as the shops do not open until 10am. The cafe has Wii so catching up on emails and Internet plus the blog.

Email telling us that Tom's dad has passed away and he is heading back to Australia. Will explore St Michael's again and then head towards Annapolis as the boat show starts on Wednesday. 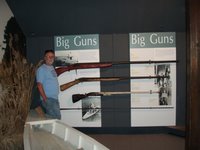 low morning and I slept in and Paul watched the Sci Fi channel. It is 70 Mile to St Michael's, we stopped off at the Bank of America-drive in tellers and ATM machines! We then took a wrong turn, but got to St Michael's in the afternoon safely. We visited the Maritime Museum we had a 2 hour walk around, one of the most noticable things where the extra large shotguns that where used for duck shooting they are just stagering in size and a good kill took out 30 ducks in one shotthere was also information on how the oyster industrie started we then stopped off at the "Character's" pub for a beer. Stayed for dinner as there was an early bird special. Drove around and found a boatyard just outside of town, parked the car and slept in the car overnight near the water. 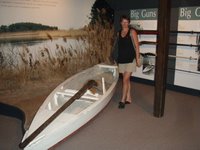 Day 29
Drove through Portsmouth, Suffolk and arrived at Virginia Beach. Went into the Edgar Cayce Centre. Walked along the boardwalk-it was the King Neptune Festival and we saw sand sculptures, and lots of stalls with art works along the beach. Lovely day to spend outside.

We then crossed Chesapeake Bay Bridge Tunnel-Toll was $12. Once across we went off the main road and explored. Very remote and small villages and lots of farm land and fishing areas. The farms were soya bean, corn, tomato's, Christmas trees, cotton. Lots of Halloween decorations in the yards of the houses.

We booked into the Comfort Inn and made chicken sandwiches for dinner.


Day 28
Arrived at Jamestown, saw the fort and archaeological dig. After that we headed towards Newport Mews to visit the Mariner's Museum, where we learnt about the Civil War ironclad ships-USS Monitor, CSS Virginia. Very interesting and fascinating-the first submarines as well.

After nearly a whole day here we drove across the James River-actually under in a tunnel, out halfway across the river and continues across the bridge to Portsmouth. Along the way we saw a sign to Langley Air Force Base and so headed that way to have a look. We approached the gate and a young soldier with a semi automatic met us. When we asked if we could drive in and have a look he said NO and to turn around, he took Paul's driver's licence which he returned when we had left the base.

We then headed towards Norfolk and the historic area, we stopped and walked the street and stopped for dinner. We then found a park near a funeral parlor and slept in the car.


Day 27
Spent today exploring Colonial Williamsburg. After a hard day we stopped off at an Italian restaurant for pizza then headed off towards Jamestown. We stopped off the roadside and slept in the car near College Creek. 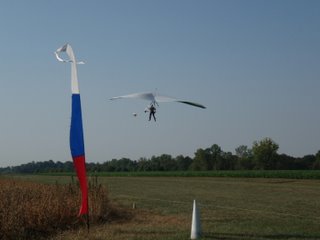 The day started out with no wind a 8am when I went for my first flight and I finished at 11am with 15 flights being done, the wind was still light but it had been a great set of flights so thought that was enough for the day.

Also I got my basic qualification today with the hand one gliding flight test passed and the writen exam passed as well at 84%, 80% is the min pass level, so I have the US Hang one qualification now, all this means though is that I can control the glider at launch and in the air but only up to a hieght of about 20 mtrs, my next stage is to go to 100 to 200 mtrs and then qualify for the Hang two, but I will do this back in Australia as there may be issues with different regulations and there is no point in doing things twice etc.

We left that morning on our way to Williamsburg via route 30. We stopped off to see the Mattaponi Indian reserve museum but it was closed. We went into Colonial Williamsburg and if we stayed in a hotel/motel we received a substantial reduction in entry fee, so we booked into the Governor's Inn. The village was great, everyone was dressed in colonial dress, they lived here and worked in their various trades in the old ways, keeping these traditions alive. We could talk and learn from them. There were re enactments, demonstrations, etc.
# posted by Paul Bushell @ 5:36 AM