Back in Oz and towards Bowen QLD

Sinclair Bay to Bowen Boat Harbour - 13.5nm - 22 November 2007
Calm day, motorsailed and have a lovely trip to Bowen. Decided to pull the BBQ in from the outer rail and I dropped my end, Paul caught it but not before the BBQ plate ended up in the water, between the last and the second markers cominig into the harbour. We tied up to the visitors wharf. Located our poles and Lee from Huon Mist hepled up pick up mooring lines and tie up. Had a relaxing afternoon aboard Huon Mist with drinks. Good to catchup with them again. The poles cost $47 per week.

Jonah Bay to Eco Resort- 6.6 nm - Eco Resort to Sinclair Bay - 4nm -21 November 2007
No wind, calm morning winds se 0-5 knots. High tide early this morning and giving us a good speed going through Gloucester Passage. Did another load of washing and the water maker is on filling the tanks. Anchored of the eco resort on a beautiful beach with shells (haven't seen those for a long time) and checked out the eco resort and Monte's resort. It is a lovely long beach. As there is a bit of a swell making the anchorage not as comfortable as we would have liked. Pulled anchor and motored across the bay to Sinclair Bay. Low tide and Paul caught a small mackerel for dinner. The bay is very shallow but more protected here and tonight we got 20-25+ knot winds but still felt comfortable. We dragged bottom and cleaned the bottom of the keel.

Doublebay to Jonah Bay - 12 nm - 20 November 2007
Winds SE 20-25knts, motorsailed, winds gusting and rolly trip. Water is the most beautiful pale blue, beautiful sunny day and able to see the islands perfectly. We anchored off the beach. We are going through Gloucester Passage tomorrow morning at high tide (early morning) which will also means that the tide will be with us and not against us.

Paul caught two fish, but just as he got them to the boat they leapt of the mine-ready to fight another day, but leaving us hungry. Did a load of washing and have hung it out to dry out on deck.

Rocky rolly night last night. As have finished our to do list Paul did a quick run into the Post Office to mail items this morning and then pulled anchor. Motor sailed and wind picked up for a short period of time then dropped back to 10 knots. We anchored right into Woodlark Bay but was too rolly with the swell so we again pulled anchor for Woodlark Bay.


Woodlark Bay is more protected from SE-E swell and it is a more comfortable anchorage. Cyclone Guba is off the North East coast near Cooktown and bringing this weather and wind to us. We caught a mackerel on the way in trolling. Coco could not wait for us to set anchor so she chewed the tail off the fish before Paul could fillet it. Definitely a ships cat. It is so lovely and peaceful here, only two other boats in the bay.

Paul and I went abard Catnap and Paul checked out thier mapping system.

We also had farewell drinks with Col and Di who may catch us up the coast once they clean their hull and fit a new anchor.


Rained this morning, we left as soon as we could pull down the shades and pull the anchor without getting drenched, Motor sailed, Genoa up. Did two loads of washing and hung them out when we anchored just off from the Whitsunday Sailing Club.

Went ashore for a coffee and to check mail. Went to the doctors as felling unwell. Returned put watching away and met Col and Di (Esoteric) at their place for drinks and back to the club for dinner.


No wind. Clam, motored reading newspapers purchased at Hamilton Island. Anchored at Cid Harbour, winds meant that there were only a few boats here at this anchorage (normally more than 20 at a time). It was very humid and raining, we put air conditioner on and rested.


Brian and Ruth heading off back to WA this morning. We dropped Brian and Ruth off at the airport, last night we had dinner ashore at a restaurant to celebrate their survival of eight weeks at sea. Last visit to the Post Office to collect water gauge and went for tour of free bus around Hamilton Island.


We wanted to take advantage of the reef before heading off but the weather was not going to allow us to do that. The wind did not abate and it was building from a N 10-20+ wind. We aimed for Tongue Bay but as the wind was northerly changed it to Turtle Bay, at the southern end of Whitsunday Island.

We sailed passed the stunningly beautiful Whitehaven Beach, with the white sand and blue water shimmering in the sunshine. The water is deep blue and so clear. 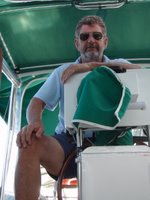 We anchored well in close to shore as the wind is still strong here but the bay does protect us from the worse of it. Boys are on the Internet and phone as we are in range. Ruth and I took the dingy ashore and had a quick walk on the beach - I mean quick the tide was coming in fast and furious-I think we had five minutes, any longer and we would have had to swim to the dingy to get back on board. Saw a beautiful bright orange stingray with jet black tail.

I am so allergic-the trip to the USA has highlighted how allergic I am. Coco must find a new home. Ruth and Brian have fallen deeply in love with her and are taking her home back to WA. 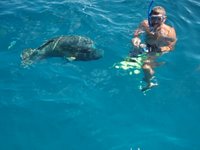 Snorkeled, Lovely and clear. We took up a mooring and it seems a lot cooler here. There are huge fish and one which took bread from our hand and allowed us to touch them. Snorkeling on the reef was so amazing. Will be a highlight of our trip to date. Saw sharks who looked well fed and thankfully were not interested in us. 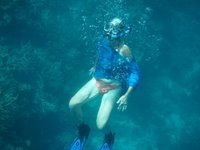 Sunny day, light winds. We motor sailed averaging 5-6 knots. Trip was a long one but it was worth it as the water was clear and calm. We anchored and were able to see the bottom clearly. Reef was vi sable and there were quite a few yachts out. Dripping with sweat we headed in for a snorkel. beautiful reef, beautiful colours and fish galore.


We had a few issues with Maxsea closing on us and we having to restart it. 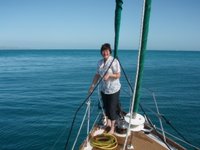 Well we had a good trip back to Hamilton Island, a total of 26 hours. From NY to Seoul to Brisbane where we took a hotel room and slept catching up on our jet lag. Heading off in the am to Hamilton island via Jetstar. We were paranoid about excess baggage but they honoured the overseas carrier and we did not have to pay, whew! Next issue will it all sink the dingy??

Brian met us at the airport and we caught up with Ruth who waited aboard when we got our luggage on board. They looked good and Cockatoo II looked even better, they had looked after her very well.

It was soooo good to be back on board and back home. Cockatoo II is definitely our home now. After lunch we dropped the mooring lines and headed to May's Bay.