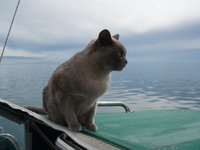 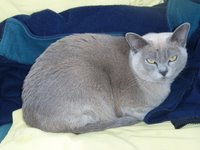 Emails from Sandy who has kindly given Coco a new home-we miss you Coco.

20 December 2007-from Sandy
I’m sure coco’s related…..She’s mad!!! She is totally convinced that it’s a good thing to chase Tigers Tail and that its a “completely safe” Extreme Sport. She’s taken to springing into Tigs basket whilst she is sitting there and then running as fast as she can up the stairs.. Of which tigs is too fat (I Mean fluffy) to chase her with any speed.

This from the cat who saw me patting a dog on the front lawn and chased it all the way home “ I may have to put up with that mad cat but I am not doing dog!!!!” Coco just watched.

She has discovered the outside world… Not to keen on the gravel out to the close line but loves the walk to the letter box.
16 December 2007 -From Brian
Tell Tracy that Coco has been supervising things here she spends most of the night with us but goes in to check on Sandy and the Girls from time to time. I think she does remember us, as she play’s with me in a totally different way than the madies that she does with Sandy and the girls. With me it is a fight on the bed trying to grab my hand and hold it then run off and hide if she can.

She loves the stairs as she can lie there unseen as she blends in perfectly with the carpet, and attack you as you come round the corner, then run off and hide under a bed so you can’t get back at her.

She can’t work out why Tiga the other cat is allowed outside but she is not at present. There are Willy Wag Tails that torment her by standing in front of the glass knowing she can’t get them. They will get a shock when Sandy eventually lets her out side.

In all the old adage of a Dog has a master Cats have slaves holds up here, she only needs to twine herself round the girls legs and she gets fed, look up at them and she gets picked up and put on a lap, attack the back of their legs and she is played with. It is quite amusing to watch her do her maddies as the floors are all Melamine Wood Look-a-Like and she cant get a grip as her claws are trimmed and there is no grain so when she corners she gets into a slide and is just like a cartoon character trying to go round a corner on Ice. Legs go like mad but she can’t get a grip so she slides into the wall or whatever is in the way.

She has several places she can get away from the girls when she has had enough several beds are about 3” off the floor which stops the girls from getting at her and there is a coffee table in the family room that is about 5” above the floor but big enough that they cant reach her so she has her peace and quiet when it suits her.

She is much more vocal than she was on the boat probably because of the kids. She meows and then Sandy makes the girls put her down.

Brian
6 December 2007 - Okay you can have coco back
The damn cat knows the difference between Cat tuna and Human tuna and will only eat the latter…..

The only one that should be sucking on my toes under the doona cover does not have four legs…..

Making the bed was easier before the cat decided to help!!!

But seriously She’s definitely all settled in as today I had Tiger sitting on my toes and Coco sitting on my chest as I had my evening glass of wine….. They only growl at each other now if there is food, A kitty litter try or a lap between them… Coco is now trying to figure out how the glass doors move out the way so she can go get the willy wag tail that teasers her out the window…..
Sandy

4 December 2007
woke up this morning with coco between my feet UNDER the covers. Tigger has stopped growling at Coco every time she sees her but Coco is still hissing at her and is very wary of entering a room if she might be in it…
Sandy

3 December 2007-
Just to let you know she has settled in fine. She is eating and drinking and pooping …All important things. Yesterday night she had her first maddy and was running around chasing a small candle along the floor and jumping at shadows. She had her first encounter with a bath and was most upset that she couldn't’t sit on my lap whilst I was in it. She had to content her self with sitting on side till I hopped out.

Whilst I do not have photographic evidence as my husband threaten to smash my camera if I took the photo I did see him in bed with a tiny little cat head poking our from under the covers on his arm. I had been advised that she had climbed in there herself as He doesn’t touch cats!

She also “helped” Make the bed this morning….

Tigger and Coco are not at the tolerating each other state yet and every now and then Tigger scares the wee out of her and she will go hide under the bed for an hour or so but she always ventures out again with out any coxing.

She also has taken to sitting on Andrews lap whilst he is at the computer… (again I didn’t tell you that)!

1 December 2007 - Linen cupboard
Wasn't interested in the fish but ate all the cat bickies I gave her.
She's has been hiding in the linen press. As you can see... First meeting with tiggs not very good.... I'm sure they will get used to each other

30 November 2007 - Coco is here!!
She arrived safely if not very noisily last night. She Meowed half way home in the car then curled up into a tiny ball on my lap and sat there the rest of the way home. After a lot of looking this morning we found her in the linen cupboard curled up asleep.

She hasn’t met tiggs yet didn’t want to traumatize her to much in one day.

Let you know how she settles in.